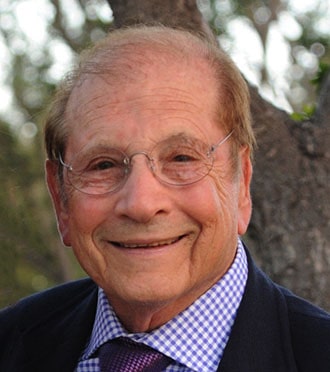 Matthew and Iris were married 1954.  They have three children, a son Steven and daughters Tamara and Stefanie, and seven grandchildren. Matthew is a native San Diegan and Iris was born in Chicago.

Matthew C. Strauss, founder and CEO of M. C. Strauss Company, 1960, and subsequently Guardian Properties, LLC, has been Owner/Builder in the development and management of real estate properties in California and Arizona. Matthew received his bachelor’s degree from San Diego State University in 1955. He served as an Officer in the United States Marine Corps from 1955-1957, then started his own business 1960.

Matthew was Campaign Chair of the Jewish Federation of San Diego County 1982-83, a founding investor of San Diego National Bank, early investor of Qualcomm and made several investments in the Biotech industry.  The American Jewish Committee in 1985 awarded Matthew and Iris the “Colonel Irving Solomon Human Relations Community Service Award.”  Iris is past President and Life Director of The San Diego Opera and past member of the San Diego Commission for Arts and Culture 1988 and appointed by Mayor of San Diego as Liaison for Arts and Culture 2004-2012.  She was Co-chair for the Public Arts Master Plan for City of San Diego and served on the Cultural Arts Council. & Committee for the Port of San Diego. In 1996, Iris was Co-Founder of the Dow Divas, a woman’s financial investment club that supports charitable arts organizations and has been President ever since. Iris was on the board of the Moore’s Cancer Center UCSD for several years and chaired the 2016 Spark Gala, raising the most money ever for that event.  Iris received the Women of Dedication Award from the Salvation Army and California Woman of the Year Award 1996. Matthew has been a Trustee for San Diego Museum of Contemporary Art since 1987 and President of The Board of Trustees from 2013-2016. Iris and Matthew serve on the UCSD Heath Advisory Board as Co-Chairs, Development. We are both recipients in 2019 of the “Chancellor’s Medal for Exceptional Service and Leadership in Support of the Campus Mission”.

Matthew has been President and Founder of the Matthew & Iris Strauss Family Foundation, Inc., a 501(c)(3) org., founded in 2007, a world-class art collection of international artists, housed in its own facility, open to art groups by appointment (straussfamilyfoundation.org)- has become a recognized visual arts resource in the region. Matthew is the Author of “Matt’s Almanac, The World’s great artists of the Last 800 years 1200 to 2020 from Giotto to Post Damian Hirst “, a 602-page art dictionary published 2020 and listed in Library of Congress and a PDF on the Net.

Matthew and Iris are passionate collectors of contemporary art, having acquired a world-class collection of major works since 1975 and recognized as one of the World Top 200 collections. We support numerous charities in the community, particularly the University of California San Diego including the funding of several ground-breaking clinical trials & Endowed Chairs, Jewish Community Foundation, La Jolla Playhouse, San Diego Symphony, Congregation Beth Israel, and importantly the Museum of Contemporary Art San Diego, as major donors to its 2020 major expansion, and Iris has chaired three museum Monte Carlo Gala fundraisers hosted at our home.